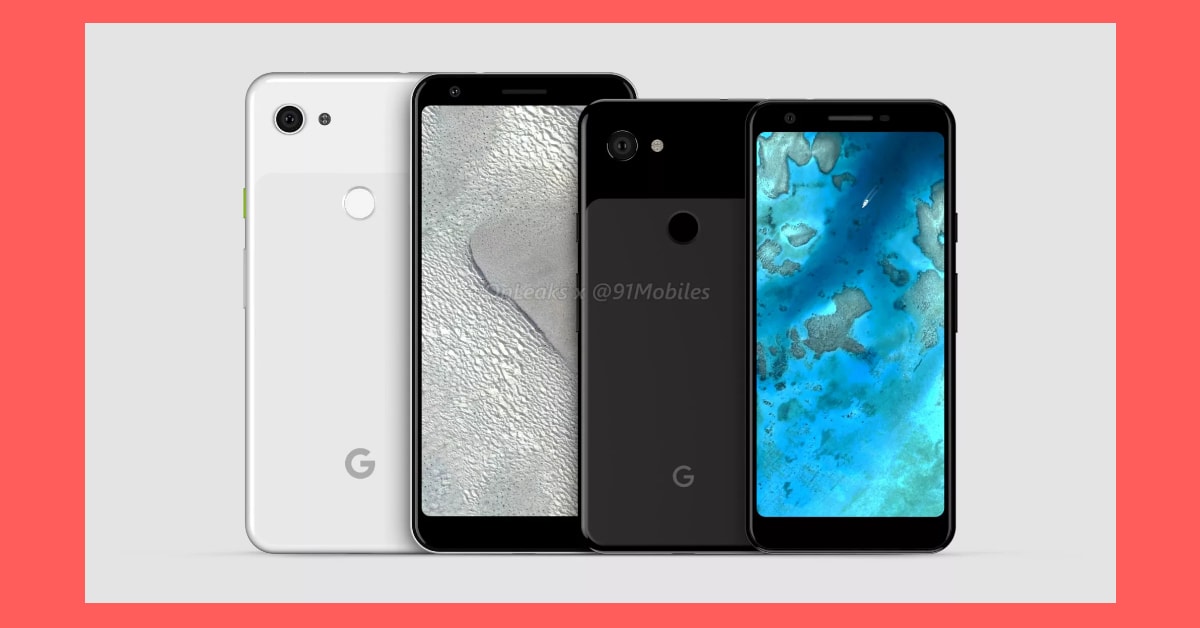 In this article, we’ll tell you everything about the upcoming Google Pixel 3 Lite and Pixel 3 Lite XL handsets. One of the latest leaked images come from the tipster OnLeaks. The leaked renders and a 360-degree video show that the Pixel 3 Lite and Pixel 3 Lite XL will come without notch. There are bezels on the top and bottom of the devices. So, they won’t have a fully bezel-less design.

On the front, both the Pixel 3 Lite phones have an earpiece, single selfie camera, and display which is not bezel-less. Also, this time there’s no front speaker at the bottom.

At the back, the phones have polycarbonate (plastic!) body instead of glass or metal. The back panel of the devices consist of a single rear-facing camera, dual-tone LED flash, fingerprint sensor, and Google’s logo. The interesting thing about these new Google Pixel 3 Lite smartphones is that you will find 3.5mm headphone jack on the top. There’s also a USB Type – C port at the bottom side.

The handsets will come in two different colors – black and white. According to the previous leaks and rumors, the Pixel 3 Lite will come with a 5.5-inch display with Full HD+ resolution and 18.5:9 aspect ratio. The phone is codenamed ‘Sargo’ and it will be powered by the Qualcomm Snapdragon 670 SoC along with 4GB of RAM and 32GB of internal storage.

The handset will feature a single 12MP rear camera and an 8MP front-facing camera. The rear camera will have a dual tone LED flash. The phone will run on the latest Android 9.0 Pie. Most probably, it will have a 2,915mAh battery with the Quick Charge 4.0 support. Again, there is no official news from Google about the specifications of the Pixel 3 Lite XL. But most likely, it will feature a 6 inches Full HD+ display with an 18.5:9 aspect ratio. The device is expected to come with Qualcomm Snapdragon 710 processor and 4GB RAM.

The handset will have a plastic body instead of the glass one. On the back, there will be a single rear-facing camera with Dual tone LED flash. And there will be a circular fingerprint scanner for sure. In terms of software, the Pixel 3 Lite XL will have the new Android Pie OS.

Undoubtedly, Google will not bring these affordable phones this year (2018). So, we expect that the Google Pixel 3 Lite and its XL version will make their debut in the first few months of the year 2019. The estimated costs of the Pixel 3 Lite will be around $400-$500. In this price range, these phones will compete with OnePlus 6T, Xiaomi Mi 8, Nokia 8.1, etc.

To know more about the Google Pixel 3 Lite and Pixel 3 Lite XL, we have wait for the official announcements and reports from the company. And don’t worry, we at Slashinfo.com will try our best to keep you updated with the latest news of the technology sector.