Home » Climate Change and Its Impact on the World Economy 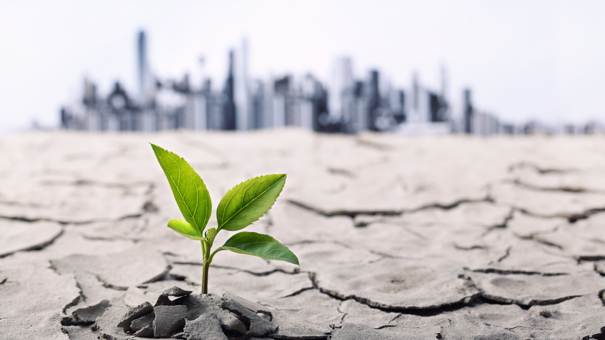 Economic impacts of climate change in developing countries: Although we have known for years that moving away from fossil fuels and toward a decarbonized economy is necessary for the survival of our planet and the well-being of coming generations, we haven’t taken any major actions on a global scale so far.

And that’s the reason why Climate change has become humanity’s biggest concern ever.

It is one of the most pressing global challenges of our time, with far-reaching and potentially devastating effects on the world economy.

Winter getting colder and summer hotter are two of the many unfortunate impacts of climate change that we can feel physically.

But Its impact is not limited to this only, a report by Swiss Re says Climate change could cost the global economy as much as $23 trillion by 2050. The rise in Global Warming has triggered a sharp rise in Heatwaves around the globe which is resulting in floods, starvation, and Ultimately Death. Some sectors are getting majorly impacted which can hit us economically hard.

The primary cause of climate change is the burning of fossil fuels, such as coal, oil, and natural gas, which release greenhouse gases into the atmosphere. These gases, such as carbon dioxide and methane, trap heat from the sun and cause the planet’s temperature to rise. This process is known as the greenhouse effect.

Other causes of climate change are deforestation, agriculture, and other land use changes that release carbon stored in trees and soil into the atmosphere, or reduce the amount of carbon that can be absorbed by these ecosystems. Additionally, industrial activities, waste disposal, and transportation also contribute to the release of greenhouse gases into the atmosphere.

The impacts of climate change can be felt in a variety of sectors, including agriculture, energy, water resources, and coastal infrastructure, among others. As the global economy becomes increasingly interconnected, the effects of climate change are likely to be felt across the world, with some regions and countries bearing a disproportionate share of the burden.

Agriculture is one of the sectors most vulnerable to the impacts of climate change. Rising temperatures and changes in precipitation patterns can lead to crop failures, reduced crop yields, and increased pest and disease outbreaks. This can lead to food insecurity, increased prices for food, and reduced economic opportunities for farmers and rural communities.

As per the reports, Developing countries, many of which rely heavily on agriculture for their economies, are particularly at risk.

For example, in Africa, where agriculture accounts for around 30% of GDP and employs more than 60% of the population, changing rainfall patterns and increased water stress are expected to reduce crop yields by up to 50% in some areas in the coming future.

Climate change also has significant implications for the energy sector, as extreme weather events, such as heat waves, droughts, and floods can disrupt energy production and damage energy infrastructure. In addition, sea level rise can threaten coastal power plants and oil and gas facilities, while increased water stress can reduce the efficiency of hydropower plants.

For example, in India, extreme heat waves and droughts have led to decreased power generation from hydropower and thermal power plants in recent years, resulting in blackouts and power outages. This has had a significant impact on India’s economy, which relies heavily on its energy sector.

Coastal cities are particularly vulnerable to the impacts of climate change, as sea level rise and increased storm surge can lead to flooding and damage to infrastructure, homes, and businesses. Additionally, saltwater intrusion can contaminate freshwater resources and damage agricultural land.

For example, Bangladesh is one of the most climate-vulnerable countries in the world. Rising sea levels and more frequent storms threaten to flood vast areas of the country, putting at risk the homes and livelihoods of millions of people. Coastal erosion and salinity also pose a major threat to agricultural land, which is a vital source of food and income for the country’s rural population.

As temperatures rise, evaporation increases, leading to reduced water availability in some areas. In addition, changing precipitation patterns can lead to both droughts and floods, which can disrupt water supply and damage infrastructure. This can have serious consequences for both human populations and ecosystems, as well as for sectors such as agriculture and energy that depend on water.

For example, in the Western United States, drought and increased water demand from population growth and agriculture have led to serious water scarcity in recent years. This has had a major impact on the region’s economy and the environment, with ecosystems and biodiversity suffering as a result.

The tourism industry is also vulnerable to the impacts of climate change. Extreme weather events, such as heat waves and hurricanes, can make certain destinations less attractive to tourists. Rising sea levels and increased coastal erosion can damage or destroy infrastructure and natural attractions. In addition, changing temperature and precipitation patterns can affect wildlife and biodiversity, which can also impact tourism.

For example, in Caribbean islands, tourism is the main economic activity, and the sector is highly vulnerable to the impacts of climate change. Extreme weather events such as hurricanes and sea level rise have caused significant damage to tourist infrastructure in recent years, and also disrupt flights and cruise ship schedules, which affect the business and jobs that depend on tourism.

According to the Swiss Re Institute’s research, The largest impact of climate change is that it could wipe up to 18% of GDP off the worldwide economy by 2050 if global temperatures rise by 3.2°C.
Here is an average real GDP loss by 2050 map: 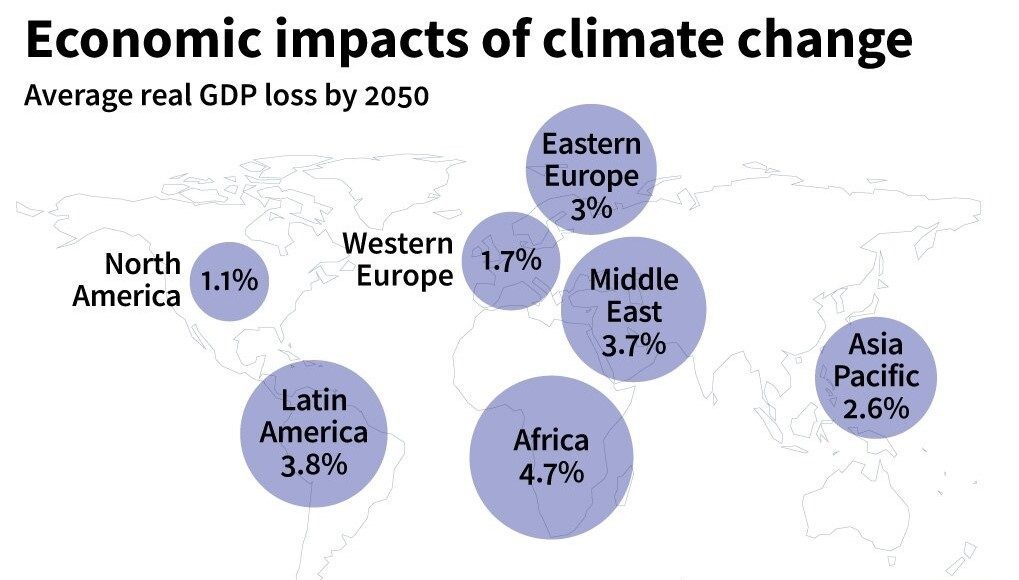 Given the serious consequences of climate change for the global economy, it is essential that we take action to reduce greenhouse gas emissions and invest in adaptation and mitigation measures. This can include a wide range of actions, such as increasing the use of renewable energy, improving energy efficiency, and protecting and restoring ecosystems, to name a few.

In order to effectively address climate change and its impacts on the economy, it is important to involve all sectors of society, including governments, businesses, and individuals. It also requires international cooperation and coordination, as climate change is a global problem that requires a global solution.

It is also important to ensure that adaptation and mitigation efforts are equitable and considerate of the needs of the most vulnerable communities and countries, especially those in developing regions with the least capacity to adapt to the impacts of climate change.

Climate change poses a significant threat to the world economy. Its impacts can be seen in various sectors such as agriculture, energy, water resources, coastal cities, and tourism. Developing countries and vulnerable communities are particularly at risk due to their limited capacity to adapt to these changes.

To mitigate the negative effects of climate change on the economy, it is crucial to take actions towards reducing greenhouse gas emissions, investing in adaptation and mitigation measures, and involving all sectors of society. International cooperation and equitable policies are also vital in addressing this global problem effectively.

As we face the challenges of climate change, let us remember that together, we have the power and the responsibility to create a sustainable future for ourselves and for generations to come.